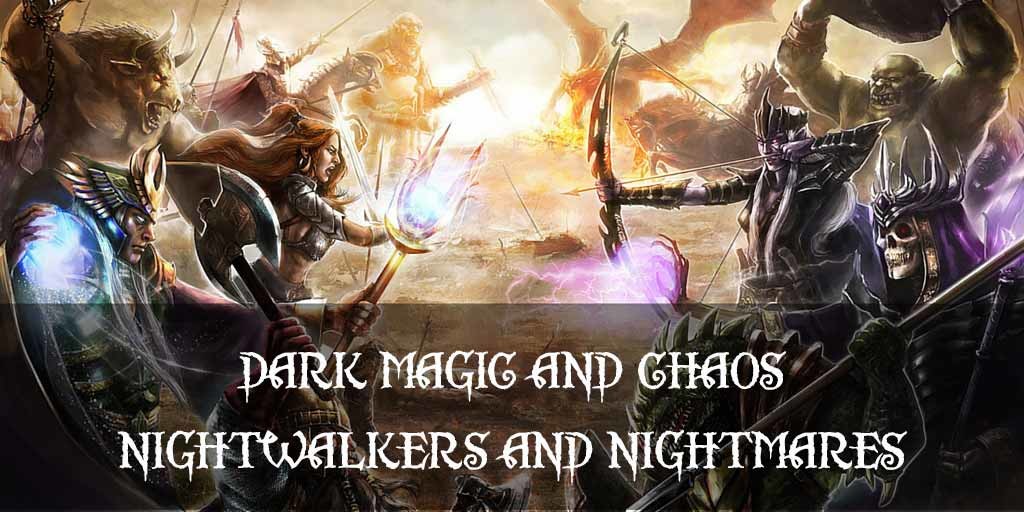 There are many dangers in Calibran. Dragons remain an ever present, if distant, threat. The undead may rise, either at the call of an evil wizard or through some accident of magic. High-spirited orcs may raid, or thieves may come upon you with a knife and a smile. As terrible as all these things may be, nothing can cause the feelings of panic and despair that the merest rumor of nightwalkers will evoke.

Though rare, these monsters have appeared a number of times in history, if only a few times since the founding of the Dragon Throne. They inevitably wreak terrible damage, at the least destroying villages, and at worst laying waste to large stretches of countryside. In every case, a group of wizards and warriors were necessary to put the monsters down. There are few things that can unite the disparate people of the Kingdom like the threat of a nightwalker.

Creatures of the uttermost evil and darkness, they seem filled with the need to destroy, maim, and murder.

To most, nightwalkers are simply like a sort of natural disaster, evil beyond understanding and impossible to reason with. To the educated, they are more complex creatures, unlike any other in Calibran. Their study is limited to the few with the stomach and heart to delve into the mysteries of their creation and the abilities they wield. Even those who study nightwalkers labor under a weight of misconceptions and misunderstanding.

Nightwalkers most often appear as walking corpses, and while it may seem as if the creatures are simply another sort of undead, they are not. It is true that they require bodies, and those bodies are most easily found in graveyards. However, they are not the dead risen to unlife. Instead, they are motivated by dark magic, and more tellingly, the powers of Chaos.

That strange force lingers on the edge of the Kingdom, and around the edges of its history. Most ignore the existence of a vast sea of Chaos to the north and east of Daexbur. A few attempt to study it, but none get far before they, whatever their starting state, are driven entirely mad by it. The effect of fusing it with the body of a person, then enlivening it through the power of magic, has a different result each time. Some are so twisted they barely resemble anything that once walked on two legs. Some, the worst, appear almost alive, their skin supple once more, and their hair no longer lank and greasy.

These nightwalkers, the ones that seem to have been brought back to new life, are invariable the worst. Though not always the most powerful, they prove to be the most cunning, and have clear memories of their living existences. These memories create no warm feelings for hearth and home in the nightwalkers’ cold breast. Instead, they delight in torturing and destroying the people they once loved. Death is never the start, but it is always the end of their torments, unless the nightwalker raises them to serve once more.

With Chaos so integral to their make up, no two nightwalkers are ever quite the same. Most wield magic powers that twist the minds and bodies of those around them, distorting magic and the very fabric of reality. Some are shambling juggernauts, powerful but barely conscious. Some are intelligent enough to make and use weapons and tools. A few are geniuses that direct all their energies to destroying and corrupting as much as possible.

It is this last that has offered one theory as to nightwalkers’ motives, and the means of creating them. The actions of most creatures, so this theory states, work towards creating order, from humble ants to mighty dragons. Nightwalkers appear from time to time to counteract that tendency, to throw things into chaos once more. It is integral to their being, and central to their purpose.

Mundane weapons seem to do them little real harm. They are all vulnerable to magical attacks. Some can also be wounded by silver weapons, and others seem most vulnerable to fire. As their powers and appearance vary from one to the next, so do their weaknesses.

Some theories for their creation would require nightwalkers to appear naturally, which most find unlikely, if not terrifying. There is no doubt, however, that they are also created through the will of a magic user. The precise method remains a mystery. The writings of those who have managed to raise one have never made for a comprehensible spell, and in any case they have always been destroyed wherever they’ve been found.

There’s more than one way to create them, in any case, as it has been managed by vengeful shamans, insane wizards, and deluded sorcerers. Every type of magic has been used, and as a result many think that it is the sheer will and genuine intent of the caster that matters, more than the specifics of the spell. He or she must truly want to summon one of these avatars of death. As a result, it is assumed that the summoner must be insane to want to be the source of so much evil.

Most often they are raised on the edges of Chaos, and those that create them are scholars or explorers who have been driven to raving madness by their proximity to it. Some appear in the middle of the Caribre Mountains, others deep in the mines of the dwarves. Sometimes they are created in the middle of the most populated areas of Calibran. This leads many to assume there are pockets of Chaos, large or small, everywhere in the world to draw upon.

Magic is considered by the elves to be a living thing, a sometimes fickle, strange force that is as willful as a child and as wise as the oldest among them. They seek to live in harmony with it, as they do with all things. They are not quite sure what Chaos is, whether it is a living thing or merely an unreasoning force in the world. By definition, there is no way to live in harmony with Chaos. It is the essence of change.

No one, as far as anyone knows, has ever gotten very deep into the Chaos Lands. To enter that place is to take part of it, to be part of the sweeping change that is the only constant. From what can be seen at its edges, and from the reports of the few who have tread the changing landscape and returned able to tell what they saw, nothing remains the same for very long in that place. Hills are here one day, and gone the next. A forest will sprout legs and scurry off along a river that quickly changes into a giant snake, before dissolving into mist.

The elves have their own name for it, poetic as they ever are. Everyone else simply calls it the Chaos, and it is a name that seems to fit well. It affects everything that comes in contact with, or even comes near it. It has been blamed for goblins’ belief in the power of luck. Metal mined from the mountains that hem the Chaos Lands in is said to have strange properties, the least of which is the tendency to change shape, rippling gently like water under a breeze. It is this nature which makes and defines nightwalkers.
Nightwalkers have never been the fodder for legends and fairy tales. They are too terrible for that. Instead, they are only spoken of in quiet whispers, or as a tale told to frighten around a campfire. The moral of the story is always the same. When a nightwalker is on the prowl, you run. Run and hide, and hope the Dragon King sends heroes to destroy it before you are found.