It’s A Killer View – The Cliffs of Ronin 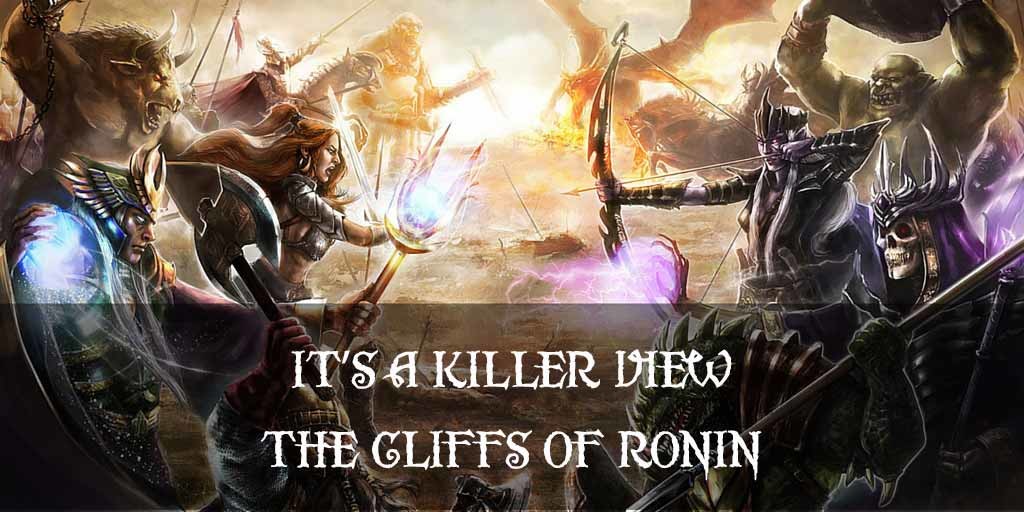 The Cliffs of Ronin

There are only two ways for most people to see the Cliffs of Ronin. The first is from the top. From there, the eye is naturally drawn to the landscape spread out before you, to the distant horizon that is often, due to the dryness of the air, clearly visible. The Cliffs don’t simply drop straight down. There are plateaus, waterfalls, plant growth, and animals, but all that is hidden. Clouds pile up at the top of the Cliffs, before pouring over to spill their water onto the farm lands to the north. But to the south the Silent Sands are visible for hundreds of miles. It looks as if a great chunk of the world has been cut out and taken elsewhere, leaving exposed the sandy base upon which everything is founded.

It is only from the bottom that the immensity can truly be appreciated. At their highest point, the Cliffs reach tens of thousands of feet above the desert sand, the tops disappearing into the underside of the clouds. From the bottom, it is possible to see the full range of the unique, vertical landscape. Birds flit out into the air, wheeling away from the Cliffs on some private errand, and even experienced explorers may not be able to put a name to them. The ramifying plateaus, the tumbling down rock and falling water, seem to call to mind the swamplands on the southern edge of the desert, only scooped up and spread generously across the cliffside.

They are undoubtedly a wonder of the world, a unique place in Calibran. While that might attract sightseers and the curious, it is unlikely that the Cliffs of Ronin would attract as much attention as they do simply because of their beauty. The spices that find their origin in the plants that grow on the Cliffs are mixed into expensive dishes all across the Kingdom. More than that, some of the stranger things found on the Cliffs are incorporated into the most powerful spells and enchantments.

The Top of the World

As might be guessed from the name, there is in fact more than one cliff. There is a precipice, a point at which the fertile fields end, dropping down to the desert thousands of feet below. The top, though, is cut into pieces by chimneys of rock and canyons that extend back from the cliff edge. The edge of each shelf could also be considered a cliff all its own.

It’s the shelves where all the life is found. Some are a few feet wide, crowded close with plants and small scurrying, furry animals. Others take a good chunk of the day to cross, simply to walk from the edge to the rising wall. There are a few big shelves near the bottom, and it’s on one, called the Grand Promenade as it extends miles along the cliff face, that the Trystanes plan to build their basecamp and settlement. Most have been worn away over the millennia by the waterfalls that stream down the faces of the cliffs, the water cutting the earth into smaller and smaller pieces.

The water tends to collect on the larger shelves, creating mostly shallow pools, though some connect to the cave system that pierces the cliffs. Caves open onto the cliffs, some openings only large enough for a small animals to run in and out, others huge mouths that are large enough to swallow whole companies of explorers. They reach back into the earth, a confusing maze of tunnels. It is in these caves that the strangest animals and plants live. Glowing fungus and stark white fish without eyes are the least of it. There are huge worms, armored and mean, that make new caves by digging into the rock. Giant bats live there, flying out at night to find prey among the animals that live on the cliffside. Also there are huge beasts, blind from lack of light, that use their ears to find their way. There is some speculation that they are relatives of the yetis that roam the northern wastes. These beasts seem to thrive on the fungus that grows in the damp caves, but they are fiercely territorial, and will protect their ranges with violence.

Explorers report vines that strangle prey and then drain them of their blood to water themselves. Others have said that there may be a sentient race, an unknown addition to mortal kind, primitive and shy, living on the cliffs. Witnesses claimed missing party-members were snatched by them, taken for an unknown reason. Others claim they have fought battles with groups of the natives, the enemy always completely silent. Most consider this to be a tall tale, the result of explorers confused or perhaps delirious from the hardships they’ve faced.

The Cliffs were once used as a weapon, strangely enough. Almorwen, the great elven wizard, lured an old dragon, Criidath the Reckless, to the Cliffs of Ronin. They fought a mighty battle and Almorwen’s daughter finally pulled the cliffside down upon the dragon, sending it falling thousands of feet, with boulders the size of houses crushing him below. It was the first time a mortal had killed a dragon, and it set in motion all the events that would follow, up to the founding of the Dragon Throne. Those who go to the cliffs say that the scar, the place where the cliffs collapsed, is still visible. They call it the Reckless Scar, and say that the animals and plants of the cliffside have let it be, as if they too recognize the importance of that moment, and wished to leave a memorial of it.

To the east the cliffs drop in height, and the landscape rises to meet them. If you were to walk west along the base of the cliffs (though you would most likely die long before you finished the journey), by the time you reached the eaves of the Glittering Forest the mighty Cliffs of Ronin are reduced to a mere high ridge of earth. The strangeness of the plants and animals has disappeared, left behind where the Cliffs are tallest. The most valuable plants, the ones that produce the spices and magical ingredients, are all also on the eastern part of the cliffs.

In simple area, they are not that large. The total acreage of more or less flat land provided by the shelves is probably less than a wealthy lord would command elsewhere. However, the difficulty in scaling the cliffs, and the dangers faced, have made real exploration and mapping nearly impossible. Efforts to create charts, and study the little world that exists nowhere else continues.

It is generally considered easier to climb the Cliffs from the bottom. The foolhardy and brave sometimes descend to take what they can find, quickly, and then flee back up to the top. As often as not they do not return. The most dangerous plants and animals seem to favor the top of the Cliffs, hiding in the dense, permanent cloud cover there. Little is known about most of them, and the organized efforts to learn more have met with less success. In truth, half the researchers have died in one way or another, and the rest became gibbering madmen.

The elves have their own methods of descending from the top of the Cliffs to find the things they need. They have been doing so for ages of the world, un-inclined to share their secrets with everyone else.

Organized expeditions of mapping and exploration almost always choose to start from the bottom. This involves crossing some of the driest parts of the desert, then climbing the first short stretches of cliff wall to the Grand Promenade, where water and food can be found. It is a perilous trip, but it only the beginning of the task.

Most of the trips (and all the legal ones) have been paid for or mounted with the support and permission of the Trystane family, the nobility that rules the Silent Sands. They have a stranglehold on the spice trade from the Cliffs, and most of their explorations are made with that in mind. They range along the lower parts of the cliffs, looking for ways that smugglers might climb up, and also for new plants and animals that can be turned into a money making commodity.

An occasionally ambitious nobleman will decide to try a real exploration, climbing as high as they can and doing their best to map the cliffs they climb. The most famous was led by Lord Marwan Trystane, a second son of the family and graduate of the Lyceum. This expedition was not famous for its success, however, but rather its failure. Survivors report that, high on the Cliffs, men begin to lose their minds. Expedition members went missing, either taken or walking off into the wilderness for some unknown reason. Edible food began to grow short, and the expedition ate the strange things they found with unexpected results. Men were changed physically, or made violent, or simply died outright. Marwan was finally murdered by one of his own men, and the sole motivation for continuing died with him. The remaining members of the expedition retreated down the cliff side to the Grand Promenade, where others were waiting with medicine and food. They were all tried for the murder of a nobleman, and executed, though they all claimed that was a cleaner fate that staying on the cliffside.

The second famous expedition was more successful, led by a simple adventurer, a minotaur named Krik de-Bolg, who somehow convinced the Trystane lord of that time to give him license. This was a well planned and managed trip, business-like in a way Marwan’s enthusiastic trip had not been. It opened up several new shelves to exploitation as well as discovering the plant that was the source of a certain magical healing agent, favored by elves but mysterious to the rest of Calibran. Since then, the Trystanes have made another fortune harvesting and selling it.

The Trystanes have plans, not yet complete, of founding a settlement on a lower plateau, a place for their expeditions to rest and resupply. It’s an expensive proposition, and everything from building supplies to food would have to be carried across the driest stretches of desert. The only thing the Cliffs have in abundance, in fact, is water. That, and a generous supply of dangerous plants and animals, which is another obstacle to settlement. However, they intend to push forward with the initial camp soon.

The Cliffs of Ronin remain a largely unexplored place. It is a blank spot on the map, and most people don’t think about them much, except to curse the cost of expensive spices. However, they are one of the most unusual environments in Calibran, strange and unknown, like no place else in the Kingdom.