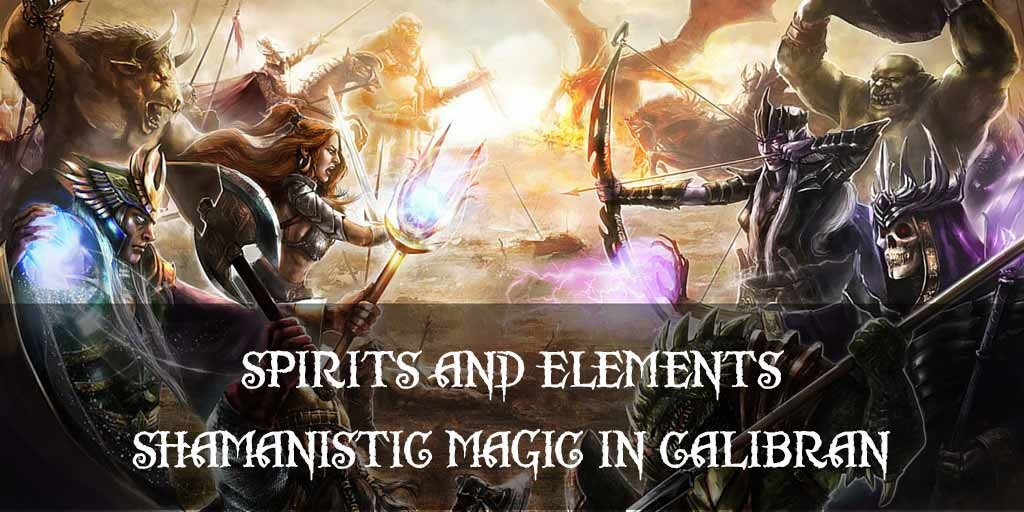 The natural world is a powerful one, and dangerous to the uninitiated. In Calibran, the true natural world, the one inhabited by spirits of air, fire, darkness, and the hunt, cannot be seen with normal eyes. The rare individuals who can see into the spirit world, and speak with the inhabitants of that strange place, are known as shamans. These special people act as mediators between the world of deep spirit, and the waking world of men.

The shaman’s role as middleman between the two worlds afford them a great deal of power, as it allows them a measure of control over the spirits of the natural world. They can affect animals and plants, as well as handle the elements themselves. The world of a shaman is a world of balance and negotiation, however, and no power comes without a price. In return for the power they wield, they must act as protectors and advisors for the people they live amongst. Shamans also act as judges, teachers, and leaders in their cultures.

Many cultures evolve a role that acts as a balance point between wild and civilized worlds. In Calibran there are shamans many places, though their powers and the way they interact with the spirit world varies depending on the culture.

Orcs live as close to nature and the spirit world as any, though for them the natural world and the challenges it presents are closer to a worthy foe than anything else. They worship the Scarred Lord, a shaman who made himself so powerful he is now a god. But to the orcs, the Scarred Lord is one of the most powerful spirits, but not the only one. There are many spirits that orcish shamans can negotiate with for power and protection.

The most powerful working of orcish shamans require pain, and sometimes an accompanying amount of blood. Death is not required, and is usually seen as sloppy and amateurish. Orcish shamans have become experts, therefore, at extracting the most amount of pain possible while leaving themselves or their subjects essentially whole. This ability has not left them especially popular outside the orcish tribes.

Orc shamans also act as judges and keepers of lore among their tribes. They are respected individuals, and wield a power and status outside the normal bickering over hierarchy of the orcs.

Minotaur shamans are unique in there are many who make their homes in a city. Like the minotaurs themselves, their shamans are centered in Kehlaktur. They don’t see the essential difference between the natural and the civilized other seem to. The ground is still earth, the walls of the buildings are rock. The spirits are still there, just moved around a bit.

As free-spirited and independent in this as in all other things, minotaurs do not worship spirits. But, they accept them as part of the world. They can be benevolent or malign, and it is worth it to find ways to stay on their good sides. Minotaur shamans, then, are consulted on the best ways to balance good luck and bad, attract helpful spirits and shoo away tricksters. Minotaur shamans are respected and powerful, but it is not the divine they traffic with.

Minotaurs use meditation and similar techniques to extend their control into the spirit world, less extreme than their orcish colleagues. As a result, any individual minotaur shaman may be less powerful than an orcish one. Minotaurs have practiced working together, combining their efforts. A coven of minotaur shamans working together can produce results that outstrip any single shaman of another culture.

There are other ways that minotaurs have found of contacting the spirit world. The raging Brothers of the Horn have found that their madness has allowed them to call upon spirits of fury and death. When the Horn Brothers work themselves into a frenzy, insanity and blood fulfill strange pacts for power in battle the minotaurs have made.

The dark elves are as secretive about their magic as they are about almost everything. Very few outsiders have been allowed to learn much, or even see much, of the power the dark elves wield in the spirit world.

With their devotion to Houriel, it is unlikely that dark elves would worship or bow down to spirits of any sort. Instead, what few records there are of dark elves and spirits seem to report that instead of negotiating, dark elves have found ways to break spirits, and control them. The techniques are mysterious, and how any mortal could learn to chain something as powerful and rebellious as a spirit remains unknown. The effectiveness, however, has never been doubted.

Closest to the minotaur way of thinking, goblins don’t venerate the spiritual word, though unlike the minotaurs neither do they show it a great deal of respect. To them, spirits are like business partners or clients, while the goblins act as middlemen to the material world. Each favor asked or given is a transaction, with goblin shamans seeking to take a cut of power from each one.

The shamans that live in Daexbur, and the goblin quarters of most cities, do have genuine power. It might not be as raw that of the orcs, or as disciplined as a that of a minotaur shaman, but they do work in the spirit world, achieving the altered states necessary most often by using mind altering drugs. Unlike most other shamans, however, goblins work at least as much in the heads of their clients and audiences as they do in the spirit world. Goblin shamans often masterfully use sleights of hand to make birds fly from nowhere, or draw bits of iron and other strange artifacts from those they cure or bless. It’s all to make everything seem grander, more effective, and more expensive than it actually is.

For whatever reason, goblins are some of the more effective healers when it comes to issues of the spirit and mind. Perhaps their constant trickery comes in handy, but they are canny when it comes to diagnosing and curing ailments.

In the far northwest, the barbarian clans each owe their allegiance to some totem spirit, an animal that represents them and gives them gifts. The barbarians worship these clan spirits alongside Cael the Hunter and the other gods. Shamans in barbarian clans are most often leaders in the clan. They have a special relationship with the clan’s spirit, and that tends to express itself in their magic.

Some shamans follow the hunters across the tundra, or sail in ships along with raiders and traders. They use their skills to quell impending storms, or draw food and water from an otherwise unforgiving landscape. As a result, barbarian sailors often risk sailing into weather most others would not risk, or marching through otherwise impassible wastes, trusting their shamans will come to their aid if need be.

There are those with the ability to see the spirits and their world all over Calibran. In some cultures, they are honored for this gift and raised to places of importance. In others, they are ignored or disbelieved. Some conceive themselves mad as a result, but others learn to trust their abilities, and turn them to their advantage.

In the hinterlands, or in farming communities far from the bustle of cities, the natural world has more of a hold. Humans, in particular, tend to fear these nascent shamans. They are called cunning folk, and live off by themselves, keeping the company of spirits, called on only when a curse requires casting or dispelling. In some places, the mad are also respected for their connection to the spirit world. These self-taught shamans tend to be less powerful than ones taught by a master in a long line of tradition.

Though less respected than wizards or sorcerers in many places, shamans wield a power that is unique and dangerous. And more than just powerful casters, they often serve important roles in their cultures, keepers of laws and legends. More than anything, however, they have access to a world that most, even the most skilled wizard or sorcerer, will never have more than a glimpse of.