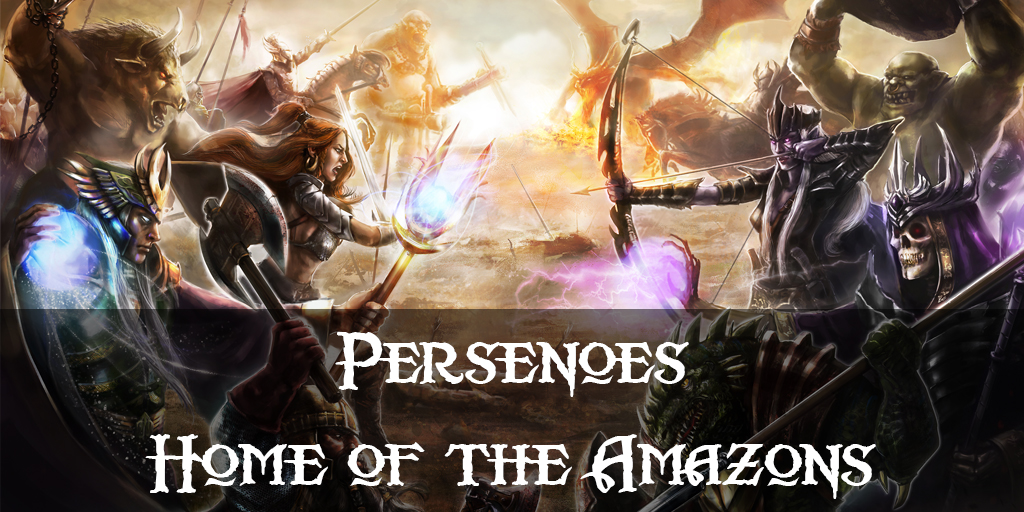 The Great Western Ocean, as far as the people of Calibran are concerned, stretches from the westernmost of the Brigand Islands and on into empty infinity. To most it is a mysterious place, beyond knowing. Those few who dwell on the ocean’s shores are often said to share in some of the ocean’s strangeness. So it is with the island of Persenoes and its amazon inhabitants.

The island itself bears south of Pelaj and east of the entrance to the Narrows. Persenoes is also the name of the only city of note on the island, both home and capital of the amazon culture. The tales told of the amazons on the mainland are enough to make most either blush or cringe. Their warriors have taken on the status of myth, and they are said to practice the sort of dark magic only women know.

Those who have actually been to the island know all the stories are nonsense. The amazons are unusually hard-headed, and disdain magic in favor of strength of arms and agility of mind. Most of what is said of the amazons is made up of whole cloth. But one thing is true, that the amazons are ruled by women. That, and that they love their island home above all other places.

Persenoes is both the island and the capital city. The island is rocky and bare, the center dominated by the volcano Theras. The volcano is quiet these days, and at most he smokes and rumbles in his sleep. The amazons refer to him as their grumpy grandfather: occasionally loud and dangerous but for the most part useless, except as a source of noxious gases.

To Thera’s north are the Back Hills. The people who live there are famous for their hard-headed natures, even among the grounded and tough minded people of Persenoes. They must be the most stubborn people in the world to draw a living from that rocky countryside, it is said by the city dwellers. Shepherds is what they are, mostly, though there are vineyards in some of the more hospitable spots and they also grow olives to sell in the city.

To the south of the volcano is the more built up, civilized part of the island. Quarries surround the city, providing the white marble that is characteristic of the city. Most, upon arriving in the port of Persenoes, look up to see the High Tier, a ring of glorious structures that form the highest, most prestigious part of Persenoes. The Royal Palace, the temple of the amazons’ goddess Asteria, the law courts, and all the greatest buildings are on the High Tier. Their eyes lower, inevitably, from that clean, blinding vision of civilization to see the squalor and muck of the port itself. Between the two extremes lies most of the city, the rich and the respected crowding up against the High Tier and the poor and desperate forced down toward the port.

The island is ringed with a wall of reefs and sandbars, protecting the island both against the worst of the storms that can rage in the wide ocean, and also against invaders from the mainland. Pirates from the Brigand Islands have sometimes seen Persenoes as an easy target. Most such raiders died when the reefs tore the hulls of their ships open. The survivors were hung by the amazons as a warning to others.

There are a few breaks in the reef walls that allow ships through, the largest at the mouth of Persenoes harbor, to the south of the city. There are other, smaller openings as well, too small to send a warship or troop transport through, but big enough for the small fishing boats that make up the majority of the Persenoan navy. As a rule, the amazons are uninterested in what goes on in the wider world, and so have few warships or long-distance merchants. There are plenty of reasons for others to come to Persenoes to trade, and the amazons have never seen a necessity for sending their own people abroad, except in rare circumstances.

Asteria, the goddess the people of Persenoes worship, has a number of different aspects. The aspects all have different personalities, as well as different skills and traits. And yet according to her priestesses, they are all Asteria.

One, perhaps the most widely worshipped aspect among the people of the Back Hills, is that of Asteria as a hunter. She carries a bow, and sets a pack of immortal hounds on her prey. She prowls through the rough, uncivilized country looking for interesting game. To the shepherds, distant rumbling thunder is the growling of Asteria’s dogs. When they hear it, they pray to her to pass them by.

Other aspects are more gentle, though none could be said to be forgiving. One such is that of a teacher and scholar. The people of Persenoes credit Asteria in this aspect with writing their law code, and with providing many of the inventions and advances that make life easier on the island.

A third aspect, popular with the more urban population of Persenoes, is that of a warrior, or captain of warriors. According to the amazons, Asteria in this guise was responsible for introducing organized fighting in ranks and tactics like shield walls and other innovations. Asteria the Captain is a canny fighter who prefers sharp wits to dumb, bull strength.

This aspect is most likely so popular because warriors are highly regarded among the amazons. Despite their lack of involvement with the outside world, the amazons have kept a strong martial tradition alive, so that their soldiers are still regarded as among the most skilled and sophisticated fighters in Calibran. They fight with spears, or sometimes shields and swords. Their archers are also the equal of any but the wood elves.

Their appreciation of the physical and mental has meant that the numinous and arcane are neglected on the island. Most amazonians (men and women) regard magic as an unnatural intrusion on the ordered world. There are a few wizards on the island, but they tend to be foreigners who have settled in the city for some reason. The one exception is a tendency to seek out fortune tellers, and follow their pronouncements. The chiefest seer on the island is the Sybil, who lives in a cave near Thera and says the spirit of the volcano sends her visions of the future. Most wizards think she is a fraud while acknowledging that the magic of foresight is tricky and poorly understood.

Strangely, there is a strong natural talent for sorcery, the innate magic that some in Calibran are born with. The Queen maintains a small group of sorcerers to cast magic for the kingdom’s needs. They have their own traditions and methods of magic, strange to those of the mainland, and are capable of working together to cast mighty spells.