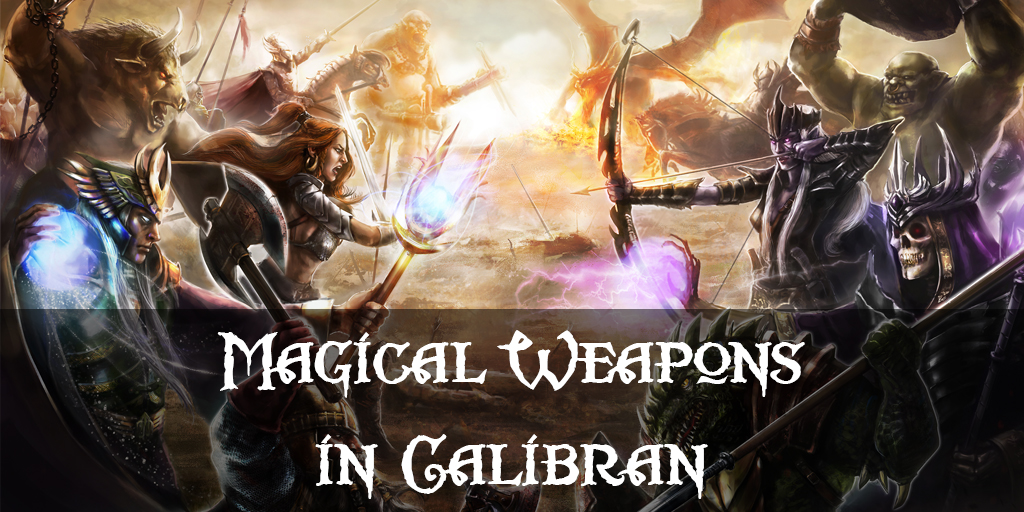 In fantasy, weapons of magic and might are almost as well known as the characters that wield them. What would Bilbo be without Sting, or Elric without Stormbringer? How long would Arthur have kept his throne without Excalibur?

Enchanted weapons are fixtures in fantasy, and with good reason. Spells are great, but they are mysterious and distant. It’s easier to picture ourselves wielding a magic blade than speaking arcane words. It’s the enchanted sword in the hero’s hand that will endure as the most iconic incarnation of fantasy.

We haven’t neglected this aspect of our worldbuilding. In Calibran, magic weapons are rare, but a few, at any rate, will find their way into our heroes’ hands. But where do magic weapons in Calibran come from?

From the Forges of the Dwarves

To call weapons enhanced by magic ‘common’ is to give a false impression. In truth, even the least enchanted sword or dagger is rarer than rubies. But, if one were able to list all the weapons that have some spell wedded to them, those known as well as the ones that are lost in dark caverns or buried cities, more would have been forged by dwarven hands than any other.

The dwarves of Mil Dundohr are well known for the quality of their weapons, made from a steel at once harder and more flexible than that humans can produce. The swords and axes of Khorduum are legendary and prized by great warriors and lords for their amazing craftsmanship and durability. But these are no more than toys compared to the truly enchanted swords, axes, and hammers of the Dwarves. Those weapons combine the subtle art of smithing with the arcane mysteries of dwarven runes. The greatest smiths among the Dwarves have always been masters of runic magic as well as masters of fire and steel. They know metal well enough to see what needs to be strengthened and where precisely a rune should be placed to turn a simple sword into an indestructible length of hardened flame, leeching the forge fire latent in the steel to set enemies alight when a true blow lands, or using the cold of quenching water to freeze an opponent, or any of a myriad of other effects.

Dwarven weapons are most often made for dwarven stature and strength. For that reason, while prized, they are often both too short and too heavy for best use by the other mortal races. Still, they command a hefty price and legendary reputation.

Every elven weapon is, in some sense, enchanted. Most have only small charms, however, to make the grip of a sword fit more snugly, or to keep an edge sharp despite abuse. Elves use magic as a common part of every day life, and it would never occur to most to divide any of their crafts into magical and nonmagical types. However, truly enchanted elven weapons are extremely rare outside their forests in Calibran proper.

Elven weapons of any kind are almost never sold on the open market. They rarely feel the need to trade, and when they do weapons are essentially never traded to outsiders. One must be a close friend or ally to be given a chance to own even the least elf forged sword. The greatest magic weapons are hidden and hoarded, and they are only revealed on the rare occasions they are required.

If dwarven-rune smiths find the essential nature of a weapon and enhance it, making it somehow more of a sword, more of a shield, stronger or sharper, elven enchantments change the essential nature of those things they enchant. A sword is no longer just a sword; it can summon wind or water to do its wielder’s bidding, or charm armies to turn their allegiances. Some weapons have even been given a sort of life and independent intelligence by elven sorceries, making them allies (or enemies) instead of tools. These great weapons have names, identities, and histories of their own, and are treated by their elven caretakers as worthy of respect and attention.

Artifacts of the Distant Past

History in Calibran really begins only a couple thousands years ago. Most scholars only trust implicitly texts that have been written since the founding of the dragon throne. The reason is simple: the dragon wars destroyed so much of what had come before that there are large gaps in knowledge and understanding. There are ruins buried beneath the silent sands; no one, not even the elves, know who built them, when, or why. There are other such remains of lost cities, hidden in mountains or out of the way places.

The dragons, if they know the truth, rarely reveal their wisdom, and their tendency to twist truth or simply lie to put themselves in a better light, or for some complex scheme for their own advantage, is part of what makes the study of history so difficult, the written histories so suspect.

This much is known. There were several great peoples and cultures that rose and fell in the mists of time. Some are known and more or less understood, while most have remained mysteries. At least a few had magic and craft to match what can be found today, and there are some hints they were capable of even more. Weapons and other artifacts, many with powers only poorly understood, have been found in these ruins, indications of the heights to which those fallen kingdoms had aspired.

For all their wisdom and power, dragons seldom actually make anything. Who needs swords when you have claws longer than a man’s height, or armor when you have scales that can’t be pierced by mundane weapons? Who needs carts or roads when you can lift an ox one handed and fly off with it?

Dragons do prize the craftsmanship of other races, but merely as an ornament to their hoard, a way of declaring their status. On rare occasions, however, dragons have been moved to turn their prodigious power to the making of tools and weapons. Sometimes, it was to meet some particular need of their own. More often, a dragon was equipping a trusted servant before sending them off on a perilous mission. It’s an interesting twist of history that almost all dragon made weapons were crafted to be used by mortals. Long after the original purpose has been forgotten, they are still being wielded by mortals, now on business of their own.

There are rumors of yet more powerful weapons, god-forged in the midsts of time, spells made tangible that can not only kill, but rend their victims entirely from existence. Rumors are all that remain of such things, though, and legends of the destruction such things wreaked on the face of the world before history began.