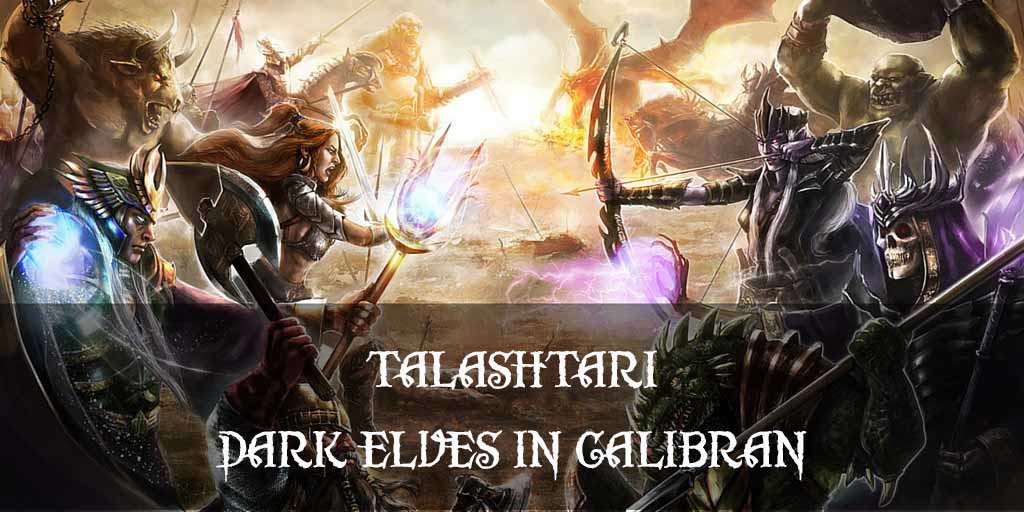 Elves are usually cast as good guys in fantasy fiction. They are ethereal beings that most often act as wizards, guides, and heroes. Good guys, in other words. Upright individuals. Goody two-shoes. Pretty boys. They’re popular because they often represent the best aspects of ourselves, the finest and most worthy, the most virtuous among us. In Tolkien’s Middle Earth, they are akin to an order of angels, and the authors that have came after him have followed the Professor’s lead in that respect.

Though, honestly, all that goodness can get a little boring. Who doesn’t want to give into the temptation to be bad every once in awhile?

Dark elves offer a balance to the elves of the forest. They’re a lot less cuddly. They have a reputation for cruelty that most other fantasy races can’t match. Moreover, they linger in the darkness, in the sort of places most people, for all their mature protestations, are still a little nervous about venturing into. They’re murderers, favoring not a stand up fight, but a sly knife or subtle poison in a goblet of wine. You wouldn’t want to turn your back on them.

We tend to think of dark elves as being a new invention. Unlike standard elves, their lineage is a little harder to track back through the history of fantasy fiction. However, they have their roots hundreds of years ago in Viking mythology.

The word ‘elf’ comes from northern European mythology, where it was originally spelled ‘alf’ (not to be confused with the fuzzy TV alien from the 80’s). German elves were quite a bit different than the modern fantasy versions. Sometimes they could be benevolent, but more often they were nasty and cruel. Elves were supernatural creatures, always just out of sight, making magic and playing tricks.

There were several different types of elves in the Germanic and related Norse traditions. Sometimes the elves were sort-of-gods, particularly in Norse mythology where they lived in Alfheim and were allies of Odin and his family. Later traditions would tend to divide those elves into different sorts: ljosalfar, svartalfar, and dokkalfar. Or, in English, light elves, black elves, and dark elves. Black elves and dark elves might actually have been the same thing. Or, dark elves might have been another name for dwarves. As always, when looking at mythology, there’s a lot of overlap and fuzzy distinctions.

Tolkien used these ideas as the basis of his elves and their mythology. Obviously, Tolkien-ish elves evolved and changed to suit the author’s purposes, but the basic themes and ideas are still there. Light elves represented the goodness in the world, while dark elves were not entirely to be trusted. Among the Noldor, Teleri, Sindar, and all the rest, were the Moriquendi. These were the elves who dwelled in darkness. While they were not the nasty customers later dark elves would become, there was an unmistakable taint of evil.

Gary Gygax and his buddies would build on these ideas, years later, when they decided to add some more exotic villains to their game. Over time, dark elves have continued to evolve to meet the needs of each setting and writer. When we began to build the world that would become Calibran, they seemed like a natural fit for the stories we wanted to tell.

Talashtar, City of the Dark Elves

One of the ways that Calibran is a little different from some other settings is that traditional villains aren’t, in our world, necessarily bad guys. Orcs are savage and cruel, sure, but give them a wide enough berth and they’ll leave you be. Goblins are more manic and mad than evil.

Dark elves, though, are still pretty mean. They live in the darkness of their forest, far away from the center of the kingdom and all the other people of Calibran. The most you can say about them is that they are generally more concerned with killing each other than everyone else. Love and affection may be had between family members, but each family strives and plots against the others for the dubious rewards of power and wealth.

The heart of the dark elves’ world is the deep city of Talashtar. As deep as it goes, it also stretches up high into canopy of Deth Forest. The dark elves have twisted the very trees to their will, creating the necromantic ash oaks that serve as the feast halls and watchtowers of the nobility. While not evil in the strictest sense, dark elves are ruthless, striving for domination, and that is reflected in their architecture, just as it is in every other part of their lives.

Most of the city, however, lies below the ground, in claustrophobic, half lit tunnels that open suddenly into dizzyingly large caverns. The center of Talashtar is the huge stalagmite that has been hollowed and carved into the great temple of Houriel, the elven goddess of war, violence, death, and protection. From here, Houriel’s high priestess rules the dark elves, and pits the various noble houses of Deth Forest against each other, always favoring the stronger.

Elsewhere in that great cavern is the marketplace of Talashtar, where some of the most potent potions and poisons in the world are bought and sold. The most prized of weapons are also made and sold there, ones made from metal mined in the nameless mountains to the east, bordering the ever changing Chaos Lands.

Noble houses have built and maintain their own warrens within the city, the better to protect themselves. However, the earth that surrounds Talashtar is honeycombed with secret passages and hidden ways, built with all the skill and secrecy that elves command.

If Talashtar doesn’t sound exactly homey… Well, it isn’t. Nevertheless it is home to thousands of dark elves, noble and commoner. Though many may venture out into the wider world, most return to their home. The vast majority never leave Deth Forest, or never even see the world outside the city.

If you were a dark elf, what would Talashtar mean to you?

Well, you know that place, the dark, terrible place, where monsters live? The place farm boys go to become heroes, that heroes go to rescue their loved ones, and fail? The place where all the worst, scariest stories take place? The ones without a happy ending?

You know that place? That’s where you grew up.

A Place of Terrors

One of the writers was inspired to put this together, as a song that tells of the dangers of Talashtar and the dark elves.

All you who venture through the trackless wild,

and the blackest forest, dark and dead, beguiled

by beautiful and graceful elves, ought know,

the darkest elves reside here. All is woe.

This is the city that kills: Talashtar.

Murder and mayhem, lies, deceit. They are

pitiless. Flee, you traveler, should you

who do escape bring tales of terror. Dread

this place where even dragons fear to tread.

In the world of Calibran, Deth Forest is on the far side of the Cairbre Mountains, closer to the wilderness than the civilized lands of the kingdom. Where the forest meets the mountains monsters have their lairs, giant spiders and lizards that are close cousins to dragons, all of them happy to gobble up a foolhardy adventurer. Add that to the inhospitable dark elves, and it makes for what is perhaps the most dangerous place in Calibran.

It makes sense then, that the dark elves that live there are some of the most dangerous people in our world. They have all the grace and magic of elves, and long lives to learn the skills they need to survive and thrive in such a dangerous place. Minotaurs may be stronger, dwarves and orcs hardier, and humans more numerous. Dark elves, though, are probably the most cunning and lethal race there is.

They are seen in civilized lands, on occasion. The Dragon King, the ruler of Calibran, spends most of his time managing relations between the various kingdoms and people of Calibran. The king sends messages to the High Priestess of Talashtar, and so she sends her dark elf servants with replies. Sometimes she even sends the taxes and tribute that the dark elves owe the Dragon Throne, in theory at any rate.

Sometimes dark elves are sent out on other errands, to buy the rare item that can’t be made in Talashtar or done without. Most often they go to trade for the ingredients for potions and poisons, or magic spells, that can only be found on the strange Cliffs of Ronin. Sometimes hunters are sent to that place to pick the necessary flowers and herbs themselves.

The messengers and hunters are always hard to miss. Their ash grey skin, and white hair, worn long in a fashion that has lasted centuries, are difficult if not impossible to hide. More than that, the dark elves that travel far from home are almost always women, which, in a world dominated by men, is remarkable in itself.

If there’s one thing that the inhabitants of Calibran have learned, through stories and songs if not personal experience, is that it is best to give the dark elves a wide berth, and leave them alone, to their own devices.